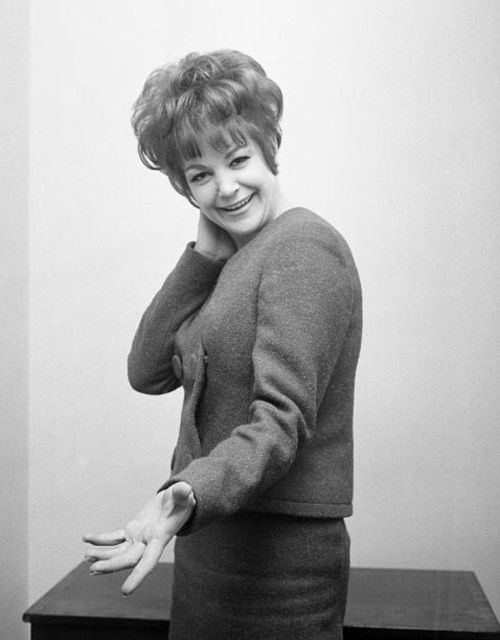 Annie Ross, a pioneering vocalese singer and songwriter, and the last surviving member of Lambert, Hendricks and Ross—arguably the best-known and most successful vocal group in jazz—died on July 21. She was 89. [Photo above of Annie Ross, courtesy of Annie Ross] 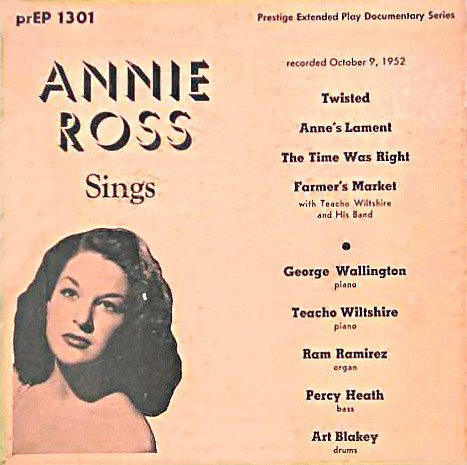 Writing lyrics to jazz standards and modern jazz solos and singing them was a mark of subterranean hipness in the late 1940s and early ’50s. Her first two vocalese sides in 1952, for which she wrote the lyrics, were Twisted, based on a Wardell Gray solo, and Farmer’s Market, based on an Art Farmer composition. Both were jukebox hits and put Ross in the same league as vocalese singers Babs Gonzales, Joe Carroll, King Pleasure, Eddie Jefferson, Dave Lambert and Buddy Stewart. 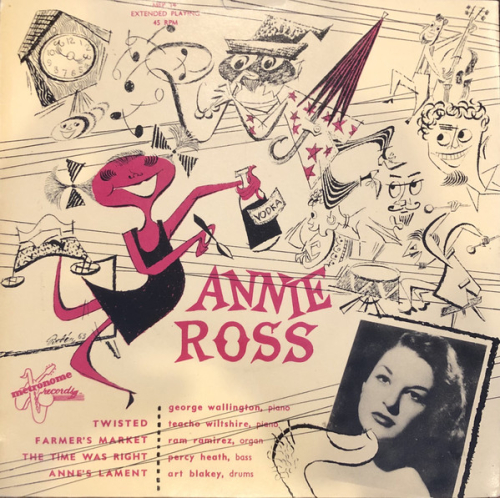 What set Ross apart in the early 1950s was a relaxed naturalism and muscular elegance akin to Billie Holiday, one of her early influences. An emigre from London who landed in New York in 1934 at age 4, Ross’s pert looks and adult-like talent landed her in a radio contest hosted by Paul Whiteman. She won and was awarded an MGM contract. In the depths of the Depression, she nested in Hollywood at the house of her aunt, Ella Logan, a Scottish-American singer and actress. Her parents returned to England, and Ross appeared in several short films and comedies. 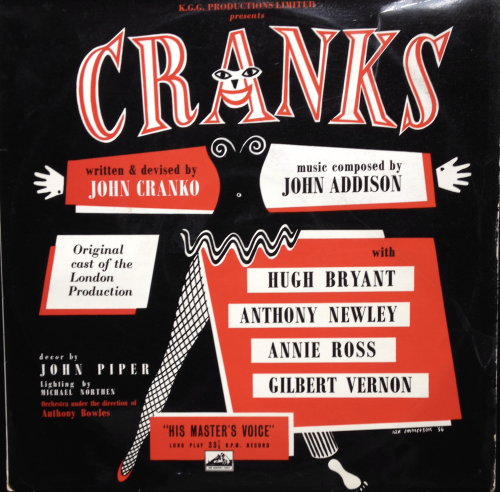 At 14, Ross wrote Let’s Fly, which was recorded by Johnny Mercer and the Pied Pipers in 1949. As jazz singing work slowed and jazz vocalese was replaced by the American songbook in the mid-1950s, Ross returned to the U.K. Back in New York in 1957 to appear in the British revue called Cranks, she teamed with Dave Lambert and Jon Hendricks, both of whom had significant reputations as vocalese singers and jazz songwriters. They formed Lambert, Hendricks and Ross, and recorded the album Sing a Song of Basie, produced by Creed Taylor. [Cover above courtesy of Todd Selbert] 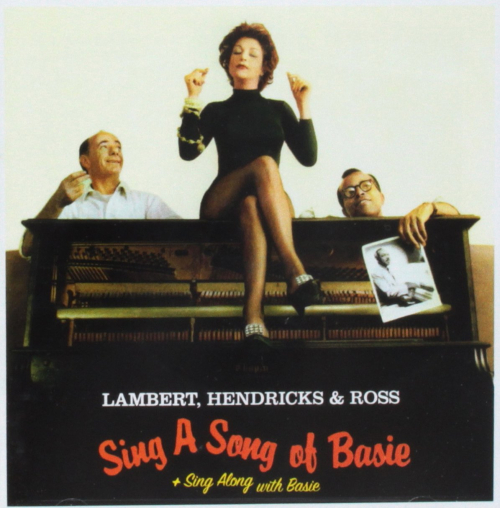 At the time, the group shattered several of society’s norms. For one, it was an integrated singing trio, which presented hurdles in segregated parts of the country. For another, Ross was a woman on par with her male counterparts, which ran counter to the suburban housewife ideal at the time. Sing a Song of Basie was so smart and swinging, the trio overcame most resistance. 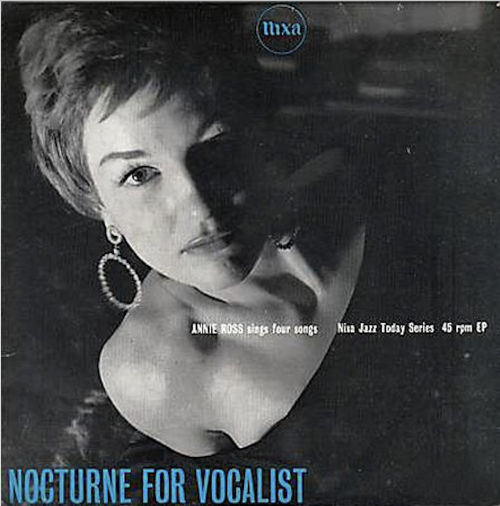 JazzWax: How did Lambert, Hendricks & Ross’ Sing a Song of Basie come about in August 1957?

Creed Taylor: Dave Lambert and Jon Hendricks came to me with the idea. I already knew Dave. I used to run into him in Greenwich Village. He made chimneys for people and was a carpenter when he wasn’t singing. Dave and Jon told me what they had in mind: a vocal album of Count Basie tunes. The two of them would be joined by other vocalists, and they’d all sing the different instrumental parts.

JW: What did you think?

CT: I loved the idea right away. Dave had already transcribed the Basie arrangements, and Jon wrote terrific lyrics for the songs. I thought the natural thing to do was to get the Basie rhythm section, man for man. So I made a few calls, and guitarist Freddie Greene, bassist Eddie Jones and drummer Sonny Payne were there for the date. Nat Pierce was on piano.

CT: The studio singers Dave brought to Beltone Studios at 4 West 31st St. didn’t swing. We started recording, and about a half hour into it, I knew the session was a bust.

CT: The singers were too rigid. I’m sure they were great at singing ad jingles, but this required phrasing and all the nuances that most studio singers don’t have.

JW: Did Basie’s rhythm section have problems with them?

CT: Right away. It was devastating. The singers were all pros but they didn’t have the feel and couldn’t pick it up. With Basie, it’s a swinging thing, meaning you have to sing behind the beat, not on it. Eddie Jones, the bassist, tried to help the singers, saying, “Look, this is the way the band plays it. It’s got to be laid back.” But they never got it. So I had to stop the date.

JW: What happened next?

CT: When the singers cleared out, Dave offered up a solution. He asked whether he, Jon and Annie Ross could overdub all the parts. I said sure, let’s give it a try. Dave said Annie would sing all the trumpet parts, he’d do the trombones, and Jon would handle the saxes.

CT: First I recorded the Basie rhythm section with Dave, Jon and Annie providing a guide track, which was a straight reading. Once that was done, we had the swing down. Then they overdubbed the additional harmonized tracks wearing headphones and listening to the guide track.

CT: Actually we had a big technical one. I was recording at the studio with a great engineer named Irv Greenbaum, who loved jazz. We captured each track on a ¼-inch Ampex recorder, but the hiss was piling up like you wouldn’t believe. Each time you add a track to tape, hiss builds. When we got to the final master, we had some careful EQ-ing [equalizing] to do. In those days, the technical ability to manipulate tapes and get rid of small problems was non-existent. I sat there for days with Irv trying to fix the hiss. Finally we just rolled off 10 to 12k [kilowatts] from the sound, and the result was great.

JW: Did you know right away you had a hit?

CT: Oh, sure. Annie frightened me, she was so good. I was in awe of her. And the session wouldn’t have existed without Jon’s great lyrics. He was totally engrossed in the Basie sections and his words brought the whole thing together.

JW: How many Grammy’s did the album win?

CT: Two. One in 1958 for Best Jazz Performance by a Group and in 2000 when the album was inducted into the Grammy Hall of Fame.

JW: What did Basie think of the album?

CT: I don’t know. Basie was on another road all the time. He was such a self-made bandleader. I’m sure he heard it, but he never mentioned it to me. And I never asked. 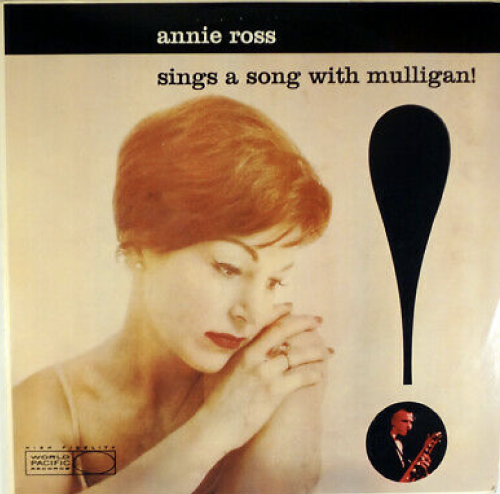 During this period, Ross also recorded a handful of smart albums for World Pacific, including Sings a Song With Mulligan! (1957), A Gasser! (1959) and Gypsy (1959). But it was her six albums with Lambert and Hendricks that made her a star. Just as Ross reached celebrity status in the late 1950s, she battled an addiction to heroin. 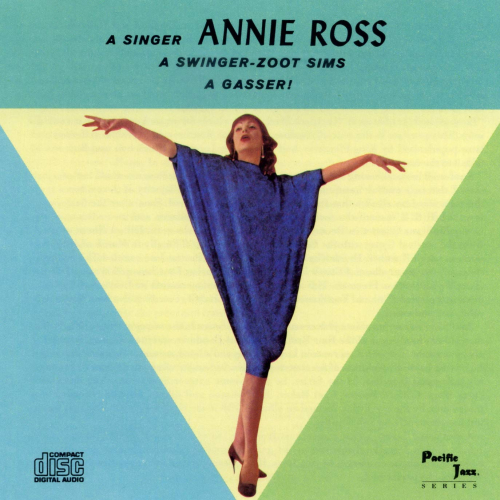 While on tour in London in 1962, she remained behind to address the problem. She was replaced by Yolande Bavan (read my interview with Yolande here). By the time Ross recovered, the rock era had arrived. While Ross continued to record and perform, she would never again achieve the same level of fame. It’s impossible to calculate the challenges Ross faced as a woman during these years, when sexism, harassment and less pay than male counterparts was standard. Perhaps Ross’s greatest legacy will be as an artist who inspired a generation of female singer-songwriters who followed her in the 1960s and ’70s. Many, like Joni Mitchell, viewed her as a remarkable singer-songwriter who fearlessly broke through barriers while coping with a range of personal and professional challenges.

Here’s Annie Ross with Lambert, Hendricks and Ross in 1960, with Count Basie on piano…